I don’t know about you, but I’ve had it up to my real women eyeballs with being told what a “real woman” looks like.
In processing my own physical appearance, I’ve never had an issue with what I see in the mirror.  I’ve always been relatively OK with what I looked like, pleased even.  The only struggle I’ve ever had with weight is not having enough.  I never would have identified the fact that I have a body image issue if it weren’t for some serious counseling.  Someone smarter than me, listening to me and the tone I used when talking about myself.

Body image issues, like most things in life, are more than skin deep.  I hated my body, on a molecular, biochemical level.  I still struggle with this.  Why do I struggle so much with endometriosis?  Why does it keep growing, spreading, worsening?  Why can’t I carry my husbands child with out a significant undertaking?  WHY won’t my body just do right?  Its so easy for everyone else. I just want to be a mother, why won’t my body let me?  What’s wrong with me?

I’ve been what some people would call “skinny shamed” my entire life.  I’ve bene condescendingly “complimented” for my slight frame for as long as I can remember.  Its been implied that I have an eating disorder since I was 14.  Through this fertility journey, I’ve received unsolicited advice about gaining weight, just relaxing, stop running, etc.  None of this has come from anyone with an actual degree in anything medical, but of course my physical appearance is up for grabs and fun-poking because I’m “so skinny.”
Side note:  that’s not ever ok.  If I did have an eating disorder, telling me to “eat a hamburger” isn’t helpful.  “Putting on a few pounds” won’t get me pregnant.  Telling me I’m “a bag of bones” isn’t edifying or uplifting, and even if its meant it as a compliment, its not.  Its rude.
In reality, I come from slim stock that has a history of thyroid disease.  In reality, I’ve tried a LOT of different ways to put on healthy weight, and nothing worked for more than 5lbs or for longer than 2 weeks or so.  In reality, it was incredibly difficult for me to eat some days because of gut wrenching nausea and pain.

During some counseling,  I was recounting some of the procedures I’d had in the past and why.  My therapist picked up on my tone and asked why I sounded so angry when discussing my body.  I didn’t realize.  She mentioned that I sounded very frustrated.  I whole heartedly agreed.  Who isn’t frustrated on this journey?  You don’t get to fertility treatments unless you’re frustrated.  Then she said the simplest thing that opened my eyes to a major problem.

Your body is doing the best it can.

As soon as my therapist said that, reminded me that my body is not doing this “to spite me”, I realized I have a problem.  I was genuinely in a place of self-loathing.  Of course my body wasn’t doing this on purpose, but I still hated myself.  I was horribly unhappy with myself.  I felt like I wasn’t deserving of my husband, as I felt like a major burden and hindrance on his own dreams and aspirations.
I am fighting endometriosis, I am combating infertility, of course.  I’m not rolling over.  But at the same time, I felt like I was fighting my own body.  These cranky old ovaries are going to get the best of me!  Uterus wants to sporadically contract, *pewpew!*  Laser for you!   I’m still not real thrilled with myself (biologically), but I’m better than I was.
Honestly, its kind of amazing what my body has been through, and what the human body, particularly the female body, is capable of enduring.  I have an endocrine disease where one of the main symptoms includes tissue mimicking natural tissue, growing at a rapid rate outside of its given area, disrupting and impeding other organ function, and causing massive amounts of bleeding and pain.  My body has been through a lot of changes in the last 15 years or so, despite the fact that my pants size hasn’t changed (until recently).

In an effort to celebrate my body and what its been through, what its capable of, I’m going to start logging some of my physical changes.  As I just mentioned, my physical measurement haven’t really changed in about 15 years.  For example, just this spring, I was able to put on my dress from my senior prom, just for kicks. 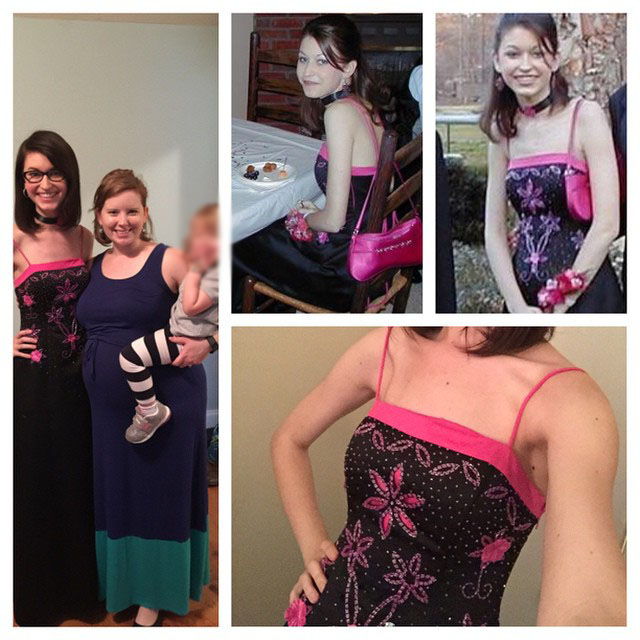 Me, high school friend and now neighbor, and a nugget and a half (in-utero), and then some serious throw back.  Little nugget was laughing, as I was being ridiculous with my nostalgia.  Such a little weirdo I was (…am)!

Three weeks ago, I started birth control again to get my body nice and zeroed out for IVF.  I haven’t been on birth control in more than 3 years.  After starting it at 16 and taking it for 8 solid years, I’ve been off for a while.  This particular flavor of hormone my RE has me on has put 8 lbs on me in two weeks.  Clearly, I’ve never been on THIS type of birth control before.  When my nurse weighed me at my baseline appointment, we both did a little happy dance.  Weight is GOOD!  However, this week, NOTHING fits anymore.  I have a tall, slim frame, so I wear clothes designed for tall, slim people, and they use to fit.  I know my waste line and weight will only increase as treatments continue, especially my stim cycle.  I literally asked for “fat pants” for Christmas.  I could easily go up 3 or 4 sizes in the next 6 weeks.

In an effort to appreciate my body and the change its going through, I’ve decided to chronicle it, using not your average belly shots.  Belly shots are mostly for pregos, showing how much their body changes while carrying a child.  I’m not pregnant, never have been.  Nevertheless, my body is going through some significant changes, pretty fast, and its going to be amazing to watch.

I should have started this a few weeks ago for a true baseline, but better late than never.

Me, today, at my belly button.  This is a good inch (or more) than what I was 2 weeks ago.  I promptly unbuttoned my pants so I could breath after taking this picture.  These jeans are now in the “nope” pile.

As my body continues to change and adapt to treatments and medications, I will chronicle that change with a simple yellow measuring tape.  The simplicity of this measurement is not the most accurate way to surmise the extreme change happening beneath the skin, but ultrasound views won’t come until later in the story.

The moral of this post:
Real women have their own struggles.  Real women are fighters, warriors, goal setters, failures, hard workers, resilient, achievers, and over comers.  Real women do what’s best for themselves and their family, and that doesn’t look like anyone else’s best or family.  Its time that women embraced our differences and struggles, encouraged and edified one another.  Setting (or letting others set) unrealistic and divisive standards for ourselves must end.

You don’t know what’s happening beneath someone else’s surface.  Someone’s physical status is no one’s business but their own.  I’m “skinny” by society’s standards, and have measurements that some people might work towards or envy.  I envy the fact that other women produce progesterone, and I can’t.  None of us are perfect.  The world is a weird place.

God is teaching me to see myself as He sees me.  I am His creation, made in His image, for His purpose and glory.  Self-loathing is not an acceptable option.  God’s glory through an imperfect and flawed human vessel, marred by sin, is my only option.

And I am sure of this, that He who began a good work in you will bring it to completion at the day of Jesus Christ.  Philippians 1:6

One thought on ““Real Women””

The story of a Mississippi couple trying to conceive

The Sky And Back

a family in the making

Tackling Endometriosis One Blog At A Time

Starbucks, Peace, and the Addition of Two Babies.

getting left behind one day at a time. suck it, infertility.

So Far So Chaos

Life after being drug through the mud

Sharing my experience of two miscarriages in the past 12 months

a look into the life of a real life housewife

The Art and Craft of Blogging

The latest news on WordPress.com and the WordPress community.